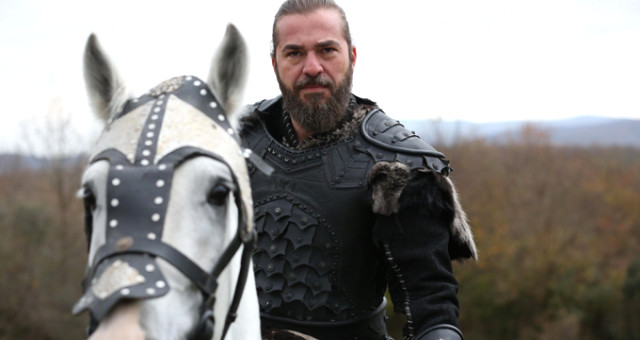 Welcome to my blog! This review has become popular and is bringing lots of visitors. After you’re done reading this post, I’d recommend also checking out one of the following:

Anyway, continue with the Ertugrul review for now!

I just finished watching the first season of the Turkish TV series Dirilis: Ertugrul, which is available on Netflix with English subtitles. In this post, I’ll summarize what this series is about, who the main characters are, what I liked and what I didn’t like. I’ll end with my overall thoughts about the show and its role in the media landscape, especially for Muslims, and then I’ll list other shows people who like Ertugrul might also like.

Please note that while I will attempt to keep spoilers to a minimum, there will naturally be some spoilers in this post. If you’re going to read it, don’t complain about spoilers later. You were warned.

Essentially, the show is about the Kayi tribe in the mid-1200s. The Kayis are a nomadic tribe of Turks who escaped from their ancestral homeland in Central Asia because of the Mongol invasions. They settled in territory controlled by the Seljuk Sultanate, but they ended up having to deal with both the Crusaders and Mongols even in their new home, as they struggled to survive and feed their people and animals.

While this show is not about the Ottomans per se, the Kayi tribe is notable in history because one of their members ended up founding a small state that expanded over time and later became the Ottoman Empire. That person, of course, is Ertugrul. So a lot of the show is actually based on a true story, though obviously many details and storylines are embellished or made up.

The major themes of the show include struggling for justice, persevering against hardship, and maintaining one’s traditions in the face of new challenges. For example, there’s often a conflict where reason suggests doing one thing, but the Oghuz Turks’ traditions say to do something else. The various characters will discuss and debate it among themselves, with different people taking different positions.

In Season 1, the bad guys are the Knights Templar. They are portrayed as a declining institution trying to remain relevant and convince the Pope to launch a new Crusade. (Note: while Jerusalem was in Muslim hands, the Crusaders still controlled territory in the Middle East, most notably Antioch.) This is probably accurate considering the history of the time. But still, the Knights Templar are a formidable enemy, one that has way more power and resources at their disposal than a nomadic tribe. So the challenges Ertugrul and his tribe face are severe.

Another interesting aspect is that the series contains references to sociopolitical events that were happening at the time. For example, the Knights Templar are shown as interested in translating Ancient Greek works into European languages. This was after Europeans had destroyed all Ancient Greek knowledge, but Muslims had preserved it. I thought that reference was pretty cool. Another aspect, that resonates with modern times, is how so many Muslim leaders were willing to sell their souls to the enemy for a cheap price. Reminds me of Muslim “leaders” today!

On a technical note, the original episodes of this show are 2 hours long. But on Netflix, they’re split up into 40 minute episodes (not including the opening theme and credits), with 76 episodes total in the first season. So it’s about 50 hours of total viewing time.

Overview of the Main Characters

Obviously, there are other characters besides these. I’ll divide the list into Kayis and non-Kayis. Kayis:

As you can tell, it’s quite the interesting mix of characters and storylines. If Wikipedia is a trustable source, the “historical” characters are Ertugrul, Suleyman Shah, Halime, Ibn Arabi, El-Aziz, and Sahabettin. The others are entirely fictional or fill-in-the-blanks, i.e. we know Suleyman Shah must have had a wife so they made up a name and personality for her. Also, one interesting fact to note is that the real-life Suleyman Shah made news headlines a few years ago when his grave had to be rescued from ISIS.

What I Liked About Dirilis: Ertugrul

Overall I like the show, and would recommend it to almost anyone. It has action, adventure, drama, and romance, so it appeals to a wide variety of audiences. The landscapes and scenery are amazing, and the garments they wear are beautiful. Since it’s a top-level Turkish series, the acting is good and the production value is high.

I love the Islamic aspects of the show. This includes the lessons given by Ibn Arabi, the heartfelt duas made by some of the characters, and the fact that many characters are shown doing day-to-day Islamic tasks like wudu, salah, and dhikr of Allah. It’s refreshing to see Islam not just talked about, but lived on-screen. This can have a motivating and rejuvenating effect for some people’s Islam.

I also love the themes of perseverance through hardship and struggle for justice that the series promotes. When you stick to your principles and trust in Allah, you will attain success. Everything that happens is a test and has been decreed by Allah in His infinite wisdom. To fight against injustice is not just about personal benefit, it’s a duty and an honor. These are excellent themes and it’s great seeing a TV show promoting them.

My overall rating for the show’s first season is 3.5 stars out of 5. I’ll explain why I deducted 1.5 stars below.

My biggest beef is with the dumb, pointless, and confusing romance between Ertugrul and Halime. One moment Ertugrul will be making dua for Allah’s guidance, the next moment he’ll be alone with a non-mahram woman, holding her hand and telling her he loves her. How does that make sense? Believe me, I’m not trying to play haram police or claim that I’m too pure for that stuff somehow. I just don’t think those scenes fit in with the overall theme of the show. Plus, the behavior they depict would have been scandalous among 13th century Muslims, to say the least.

I also didn’t like the drama between the various women of the tribe. Selcan’s plots, Gokce’s feelings, Halime trying to fit in, Aykiz getting screwed over, etc… I just forwarded through most of this stuff, along with the romance scenes. So I was often able to finish a 40-minute episode in 25-30 minutes. I wish someone would make an edit of the show called Ertugrul: The Good Parts where they just removed all the romance and drama. That would be a 4.5 star show!

To get nit-picky with the writing, there were some plot-driven happenstances that didn’t make much sense. One example is when El-Aziz was saved out in the woods; the whole buildup and execution of that scenario was rather contrived and often cringey. These scenes were a minority and didn’t affect the rest of the show too much, but they were definitely noticeable.

I deducted 0.5 stars for each of the above points. So my overall rating for the first season is 3.5 stars out of 5.

I saw the first couple episodes of Season 2, and it looks even better than Season 1. The new bad guys are the Mongols, and they actually hired Mongolian-looking actors to play them, which is awesome. And the romantic aspect is mitigated by the fact that Ertugrul and Halime are husband and wife now. But due to business in my personal life and professional life, I won’t be able to watch Season 2 at this point. Hopefully I’ll get to it after Ramadan, In Sha Allah.

The Role of Ertugrul in the Media Landscape

Some Muslims say that all TV is bad and should be avoided. In theory, this could be true. But in reality, we have lots of Muslims watching inappropriate shows like Game of Thrones, Westworld, The Big Bang Theory, etc. Not only is much of the content of these shows highly inappropriate, they’re also being used to push subtle messages and promote ideological agendas that are antithetical to Islam.

Shows like Dirilis: Ertugrul can serve as a great alternative for young Muslims. Besides, it’s no secret that the entertainment industry is a powerful tool to influence the masses and spread a worldview. Others are using it to promote vices, so to counteract that, we should definitely popularize Muslim-friendly shows that encourage good and provide positive role models for Muslim youth.

Of course, this TV show is at the end of the day a TV show, so it shouldn’t be a substitute for learning about real Islamic history and getting Islamic knowledge. The role of this show should be as a substitute for other TV shows, not a substitute for history books or true knowledge and education. As such, the fact that it’s not an accurate portrayal of history is not a big deal. A portrayal that stuck to what we know about the real Ertugrul could not serve as a compelling TV program. This can. And that’s not necessarily a bad thing.

If you like Ertugrul, you might also like Payitaht: Abdulhamid which is about the Ottoman Sultan Abdul-Hamīd II. I’ve seen a couple episodes of it, but haven’t had the chance to watch it in detail yet. You can check out an English-subtitled trailer for one of the episodes here. Some of the episodes of this show are available on YouTube with English subtitles, but I’m not sure about the rest. I did find a private Facebook group that uploads English-subtitled episodes.

Another show which caught my eye is Mehmetcik Kutul Amare, which is about the Ottoman Army in Iraq in WW1. An English-subtitled trailer can be found here. I’m not sure where to watch this series and haven’t seen any of it myself. But it’s made by the same people who made Ertugrul, and some of the actors overlap as well. I hope the episodes are made available with English subtitles soon.

Another Turkish series that’s available on Netflix is Yunus Emre. Yunus Emre existed in real life too – he became a Sufi mystic in Anatolia amidst the backdrop of the Mongol invasions. I haven’t watched this show so I don’t know much about it beyond that. But it seems more spiritual than political as compared to the above two, and less heavy on the action. See the trailer here.

Anyway, that’s all for now. Hopefully I’ll be able to write a review of Season 2 when I watch it, In Sha Allah. Until next time, salaam.

View all posts by Yousuf

20 thoughts on “Review of Ertugrul Season 1”